The Canadian Safety Commission issued a recent special report which outlines in detail, fire hazards which can be linked to lint  found in residential and commercial clothes dryers. Approximately 25,000 fires/year can be attributed to the accumulation of excessive lint found in clothes dryers and connected dryer vents. In addition, multiple deaths and costs in property damage has occurred from these types of fires.

These images below show samples of dirty and clean dryer venting. 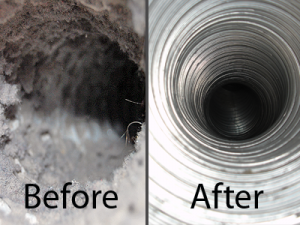 Key Reasons to Have Your Dryer Vents Cleaned

Simply replacing the dryer doesn’t eliminate the risk potential for fire. It’s usually the vent itself, which may be clogged up which is the primary issue.

Even a lint screen that is clean can trap approximately 75% of the particles which pass through the media inside the dryer. The residual lint therefore accumulates over time restricting the vent itself, thus becoming a possible fire hazard in your home.

Dryer lint is classed as a highly flammable substance which has a volatile ignition property.